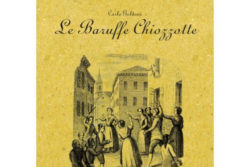 During his stay in Chioggia between 1725 and 1729, Carlo Goldoni, a famous comedy writer of the 18th century, took inspiration from the theatricality of the citizens to write his play Brawling in Chioggia.

He says in his Memories: “I’ve dealt with that copious and unruly population composed by fishermen, sailors and common women, who live the street as it was their living room; I knew their habits, their strange language, their happiness and their malice.”

This theatricality, these 18th century atmospheres are proposed every year in Chioggia, from the 1st to the 5th of August, with the Baruffe in Calle (=street brawl): a real theatre event, where Chioggia becomes the natural scenery of Goldoni comedy, and Chioggia performers become the town itself.

In his play, Goldoni not only describes a unique community, its passion, its everyday life, but also he is worried about the language, that he tries to render the most understandable to audience and readers, without missing the typical characteristic of the dialect itself, of the way of life, and of the fishermen world.