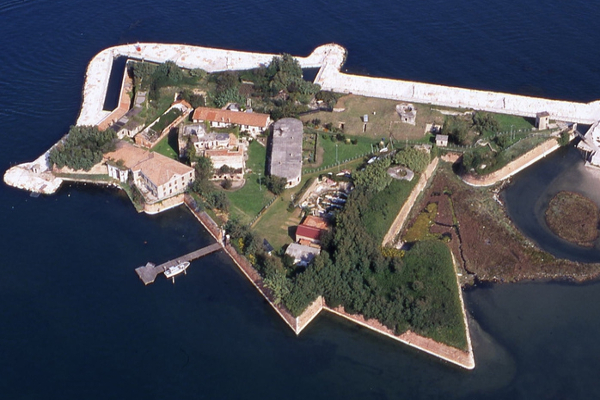 Built at the end of the 14th century on an island at the entrance of the lagoon, San Felice stronghold was a strategic place which guaranteed the security of the lagoon, especially after the War of Chioggia.

The current structure, after some rebuilding of the ancient Luppa’s Castle, looks like a five-pointed star from above. This building ensures a 360-degree control over the lagoon and the sea.

This site is not only very interesting in architectural terms (i.e. the Istria’s stone gate designed by Andrea Tirali at the beginning of the 18th century and the ruins of the military fortresses), but it is also important from a naturalistic point of view.

It is possible to take a walk or to go on a bike ride around San Felice stronghold admiring the gorgeous and unique landscape, especially at sunset.

The stronghold is an Italian Navy property and it has been abandoned for a long time. However, after attending for many years several national surveys put together by FAI (the Italian National Trust) in order to get in the national list of the places to be saved (“Italian Places I Love”), in 2016 San Felice stronghold reached the 9th place. During the summer of 2017 it was finally possible to visit the fortress thanks to some guided tours organized by San Felice Committee. The hope is to rescue this place completely in the near future and to guarantee a stable opening for the public.