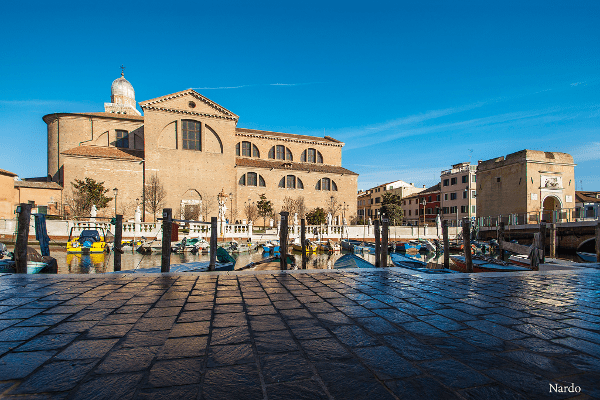 The Cathedral of Santa Maria Assunta was built on the foundation of an ancient temple, probably dating back to the 8th century, which was destroyed by a fire happened during the night between the 25 and 26 of December in 1625.

The work was commissioned to the architect Baldassare Longhena, who presented a project in which he mixed together two architectural orders: the Corinthian and the Ionic.

The outside of the church is very simple with exposed bricks. In the front of the building, inside two niches, there are the statues of the patron saints of Chioggia: Felice and Fortunato.

Near the church there is the Romanesque bell tower, which is 64 metres high and it’s covered by an octagonal dome. The small “portal” is decorated by a bas-relief of the 14th century, representing the Virgin Mary with baby Jesus and the patron Saints.

The inside of the church has a cross structure with three aisles separated by semi-columns. Down the side aisles there are six altars decorated with altarpieces of different authors, including Jacopo Palma the Young and Francesco Rosa. The baptistery (1700–1708) and the pulpit, sculpted by Bartolomeo Cavalieri in 1677, are very remarkable.