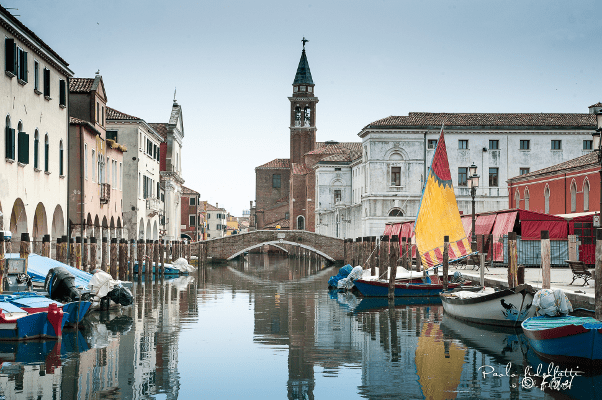 The Church of San Giacomo is one of the many treasures of Chioggia. The construction works of the church began in 1740, when the ancient three low columns naves Romanesque building was renovated. Domenico Pelli, the author of the project, opted for a single nave. In 1790 it was consecrated before being elevated to basilica in 1806. In the same year, it became the shelter of an icon “Our Lady of the Navy” which was a relic of great veneration among the catholic believers. This relic was found by Baldassarre Zalon, a farmer who had been inspired in his discovery by the appearance of the Virgin in a dream, in 1508, on the beach of Sottomarina. According to the legend, the Virgin Mary held in her arms the body of Jesus exhausted by the several sins of the people of Chioggia, and told the farmer that if the citizens would not have repented of their sins, she could not stop the fury of God as a punishment. In some documents, the icon is called “Madonna della Navicella”, because the Virgin Mary disappeared getting aboard a boat without a sailor. The icon is kept in the rich high altar.

The church houses several remarkable works of art. On the right side, for example, there is the reassembled altarpiece, attributed to Marinetti, a local painter known as “Chiozzotto”, who was an apprentice of the famous Giovanni Battista Piazzetta. In this altarpiece the beautiful figures of San Sebastiano and San Rocco are also attributed to Giovanni Bellini, or the Giambellino (1450-1516). At the centre dominates a frame fragment of a 16th century fresco with the Volto della Madonna, which was once in the chapel next to the ancient Palazzo Granaio. Another very important and precious work is the big fresco on the ceiling of 223 square feet, which represents the Glory of St. James apostle painted by Mauri brothers and Antonio Marinetti in the 18th century.